Walcott Stretchered Off Against Switzerland

I’m watching the Switzerland — England game and Theo was stretchered off just after he did well to create space for Glen Johnson who picked up an assist. It’s not clear how he got the injury but it was part of the same attack from which the goal was scored.

He was strapped around his chest and his thigh as he was stretchered off. I’ll update this post if the commentators provide any further updates.

Hot on the heels of the news that Van Persie will be out till mid-October, this one has left me in a really depressed state. Fingers crossed it won’t be as bad as it looked.

Update: Looks really bad. Thanks to Renan for posting the link to this image 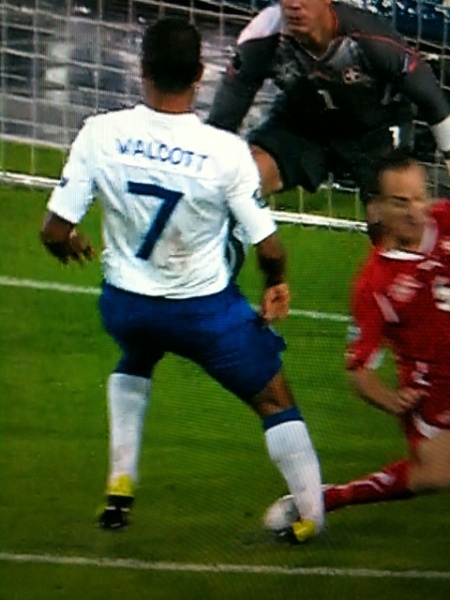 Update 2: Thanks to the Eagle eyed Karan who spotted this in the soccernet commentary (on 53′),

The news coming in regarding Walcott’s injury is that on first inspection, it’s a sprained ankle. That’s a relief for England.

That shouldn’t be as bad as a ligament damage or an ankle break.

It’s a little problem or not so big problem

Walcott was taken to hospital after the incident, but reports suggest an x-ray revealed no break, although the extent of the damage to his ligaments is not yet known.

#England boss Capello: ‘I just spoke to Theo. He tells me it’s not such big problem. I said: ‘Two weeks?’ He told me less.’Good for#Arsenal

Okay, my blood pressure is back to normal. Now I can take  a break from this. Not as bad as it could have been, is our luck finally changing!?

Most people, including myself, thought that Theo had a really poor game last night. He just couldn’t get into the game as his touch has not yet returned. Walcott though, did make a fantastic run that was crucial to our first goal. I hadn’t noticed this run while watching the game live and only saw it in the detailed highlights on ATVO. This is the only angle that captures it.

Theo starts around the half way line and the left touchline when Song has the ball. Arshavin drops deep to collect the pass before laying it off to Cesc who puts it through to Nasri. Walcott, meanwhile, makes a brilliant run right up to the penalty spot covering more than 50 yards in 7 to 8 seconds.

Johnson had a 10 yard advantage over our young winger but Theo just flew past him. No wonder the England full back was under pressure to intercept the ball.

I am not saying that Walcott had a great game, but such runs do show his importance to the team. Our wide players have to get into the box more often. This can serve as a good starting point.

The image does not fit into the width of the blog. Click on the image or open it in a new window/tab to see the complete picture. Apologies for the quality.