Of Man City, Shots From Distance, Crosses, And Defending

In India, particularly in the north, there is a saying, “sher kabhi ghaas nahin khaata hai”. A loose literal translation would be, a lion (no matter how starved he might be) doesn’t eat grass. For a football hungry person like me a weekend disrupted by weather spells disaster when the Arsenal game is postponed. Not having the makeup of a lion I ended up paying close attention to a game like Man City V Everton. Luckily for people like me that game was enjoyable in many ways including the result.

While Everton did get a win with some dogged, desperate defending, I was quite impressed with the way Man City played as well. So far this season Mancini’s men have not looked like a team capable of creating many chances but this game was different. According to the stats on Guardian Chalkboards the Moneybags had 34 shots on goal. They cannot be faulted for not trying their luck but it does give us an interesting discussion point.

There are times when pundits, bloggers, and commentators on the internet criticize Arsenal for not shooting enough. I did discuss this with some facts and snapshots in this article earlier in October. There are many who feel Arsenal can win some difficult games if they took more shots. I don’t completely agree with that opinion even though I agree Arsenal should do better with their shooting.

Against Everton, City had a total of 34 shots and if you have seen the game you’ll not be surprised when I mention that more than half, 19, came from outside the box. Those who’ve seen the game will also have noted that most of these were blocked and others were off target. Out of the 19 shots from outside the box only two forced a save from Howard and only one looked really threatening, the shot by Tevez in injury time. 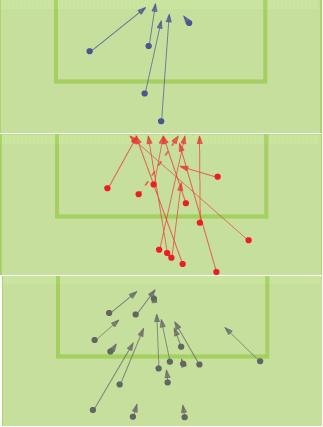 City put the visitors under siege for large parts of the game. That’s not difficult to understand because Mancini’s side were two down before twenty minutes were up. They had to go all out for the win.

Ironically, despite so many shots from outside the box, the only goal that City managed to score came from a clever dummy by Silva as he shaped to shoot but slid the ball through to Barry who in turn passed it to Yaya Toure. The Ivoirian’s cross was deflected in. Steve McManaman in the commentary box acknowledged that he was about to say that was one pass too many!

Sometimes Arsenal keep passing the ball and don’t attempt as many shots as City did. I can understand why people might be frustrated by that especially if the result is a defeat like the one against Newcastle. But the key point here is that shooting from distance, while it adds to the pressure, doesn’t really guarantee anything as we saw from this game. On another day City might have won a penalty and they did score via a deflection but these are low percentage outcomes.

I don’t argue the fact that Arsenal can improve their shooting, players like Arshavin are performing way below their own standards in this regard, but the assumption that more shooting will result in more goals and improved results seems irrational.

Now let’s look at the Crosses put in by City. The hosts attempted 33 crosses but only 5 were successful! The contrast is really stark in the following image (created Guardian Chalkbaords).

It would be the understatement of the century to say City have spent a fortune on buying players. They also have plenty of players who can cross the ball well. But when a team parks the bus and gets the basics right, crossing is often exposed as an extremely low efficiency approach. I’d rather see one good through-ball rather than ten hopeful crosses.

I don’t really mind criticism for poor shooting (something Arsenal have been guilty of off late) or wayward crosses. These are important skills and are helpful in scoring goals. But it’s extremely disappointing to see opinions that say Gunners (Clichy, Sagna, Rosicky, and others) are useless because they can’t cross or don’t shoot from distance. That level of extremism is daft.

Worst of all is the naïveté on display when people claim Arsenal will start winning titles if they buy players who can shoot from distance or can put in better crosses. It can never be that simple and this game is not a solitary example. If you look at games in which Chelsea have struggled this season, crosses or shots from distance haven’t bailed them out of trouble.

Finally, I wanted to touch upon Man City’s defending. They have an excellent defensive record this season that is bettered only be Chelsea. They also have big, strong, physical defenders and generally look quite solid at the back. Yet they conceded two soft goals against Everton. Looking at those goals again one observation was that the defenders didn’t have much support from the midfield which allowed Everton players more space and time in the box.

For the second goal, Everton certainly deserve credit and it can be argued that Zabaleta being off the pitch affected the balance, but on the whole if you look at the way they’ve been playing over the season, it’s not difficult to see their midfield plays a critical role in creating an appearance of solidity in their defence. That is one area where Arsenal must improve.

This entry was posted on Wednesday, December 22nd, 2010 at 7:49 pm and is filed under Comment. You can follow any responses to this entry through the RSS 2.0 feed. You can leave a response, or trackback from your own site.

48 Responses to Of Man City, Shots From Distance, Crosses, And Defending